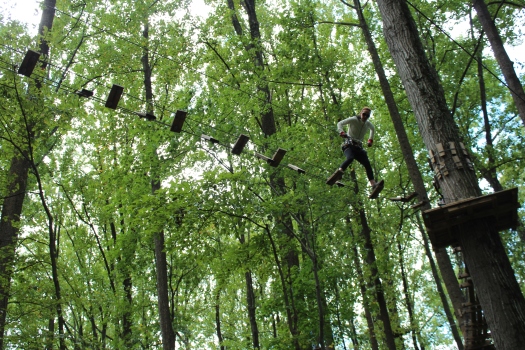 At Sandy Spring you will find 13 different rope courses of varying difficulty. The courses consist of bridges made of ropes, cable and wood, which stretch between platforms, and usually finish with a zip line descent to the ground – for those of us from kiwi land, that would be a fancy sit down flying fox.

What was great about the park is that we could all take part. Because of her age, Edie was restricted to the beginner levels but they were just thrilling enough for her.

Olive was able to have a go at the slightly more challenging levels on the condition that she had adult supervision. Richard had been exploring the lower level courses with her and felt she could handle a bit more so he casually suggested “why don’t you go with Olive on one of the green levels?” After having a whale of a time with Edie on the very lowly purple courses, how could I say no? Oh, how I wish I had…

Actually most of it was really fun but on one particular bridge I completely lost my nerve. Three quarters of the way across I just froze and panicked. Somehow I made it to the other side where I proceeded to give the emotional tree hugging demonstration you see above. My humiliation was further exacerbated by my seven-year old bounding onto the next bridge with cries of “hurry up Mum” and the strange looks I was getting from the pre teens waiting behind me for their turn. Not one of my most dignified moments.

At the next available platform I gently suggested that we might like to get down now – there were exit points dotted around each course – but this idea was of course met with a resounding “no way!” And so I had to soldier on, which in the end was a good thing – the final zip line was worth all the preceding stress.

So we can all highly recommend the Adventure Park at Sandy Spring – unless you happen to suffer from vertigo, and in that case I would advise you to steer well clear! Or hold the jackets and take photos! One thing we do recommend is arriving early – it fills up really quickly which can lead to a fair bit of waiting around between bridges.

I’ll leave you with another official pic of Miss O. We were all incredibly proud of her bravery and determination – of course now she wants to go back and get even higher – gulp!

Take care everyone. We miss you all and send lots of love and go Team New Zealand!!